Street Fighter II: The World Warrior is a fighting game published by Capcom in 1991, first released into Arcades. It is the successor of the first Street Fighter (otherwise known as "Fighting Street"). Due to its incredible popularity, it is ported to most consoles and handhelds, and updates known as Champion Edition, Turbo (Hyper Fighting), Super (The New Challengers/Turbo) and Hyper. It is then proceeded by Street Fighter III: New Generation.

When the player lost a match twice to the opponent, they'll be sent to the "fighter mocking each other" screen and then the continue screen, depicting the defeated player character with a large, light-like countdown timer. When the timer reaches zero, the player's character mugshot fades to gray and then a pale orange Game Over tagline will appear, with a scream of the player character. They'll be sent to the leaderboards or the title screen. 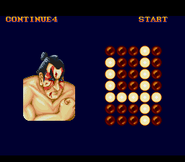 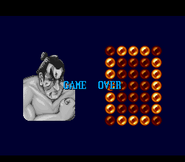 Retrieved from "https://game-over-dex.fandom.com/wiki/Street_Fighter_II:_The_World_Warrior?oldid=23089"
Community content is available under CC-BY-SA unless otherwise noted.