OH JOES! (A Proto Man Adventure) is a Mega Man fangame by Flashman85, released in April 2018 for PC. The game features three playable characters, three difficulty modes, and multiple language options. The Game Over art was drawn by Phusion.

If the player dies and has no lives remaining, they will be taken to the Game Over screen. The Game Over screen consists of a static image of the game's various enemies posing triumphantly, with a text box below. The text box momentarily displays the text "GAME OVER", then it automatically changes to a randomly selected message. Most messages are gameplay hints; however, there are some comments in the style of the death messages from classic Sierra adventure games. The player manually advances the text, which changes to a menu where the player can choose to continue, change characters, or exit to the title screen. 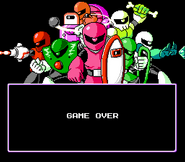 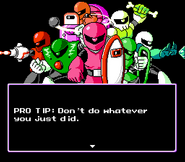 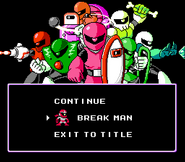 Add a photo to this gallery

In total, there are 72 unique Game Over messages. However, several factors determine which messages the player is eligible to receive, resulting in only 28 possible messages on any given Game Over.

Specifically, the aforementioned main gimmicks are divided into the following categories: ice blocks, destructible blocks, moving platforms, ladders, magnets, needles, lasers, quicksand, disappearing blocks, springs, water, and fake blocks. If a player dies in an area with multiple gimmicks, one of these gimmick categories is randomly selected before the Game Over screen appears. Additionally, there are categories for areas with no gimmicks (eg, the entire first stage) and the final boss.

For the most part, Game Over messages are the same across all language options. Any differences are due to text space limitations and/or the interpretive nature of translation (particularly in the case of referential jokes, such as the Dragon Warrior and Space Quest IV death messages found in the original English text).

Retrieved from "https://game-over-dex.fandom.com/wiki/OH_JOES!_(A_Proto_Man_Adventure)?oldid=22157"
Community content is available under CC-BY-SA unless otherwise noted.